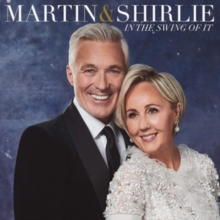 In the Swing of It CD / Album

For Martin Kemp and his wife Shirlie, recording a Swing album together has been as much of a surprise to them as it will no doubt be to their fans. Separately the '80s icons have enjoyed huge chart success over the decades with the Brit Award-winning Spandau Ballet and as one half of Pepsi and Shirlie, touring with best friend George Michael when they were backing singers in the glory days of Wham! Yet, up until the summer of 2019, the only singing the couple did together was probably in the kitchen while cooking a Sunday roast. Martin had been working on a solo album with super producer Brian Rawling (Cher, Tina Turner, One Direction) when he invited his wife to step back into the recording studio for the first time in 30 years to help him out on a track. What came from the impromptu session was pure 'magic' and the album 'In the Swing of It' was born. The album is an 'open love letter' of carefully selected, uplifting Swing covers, chosen by the couple to reflect on their relationship and includes two new tracks written by their songwriter daughter Harleymoon Kemp.